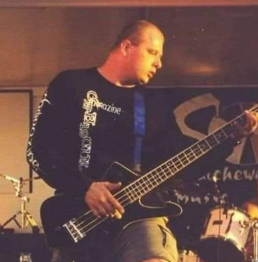 It is with deep sadness that we announce the passing of our father and dear friend Wayne Giroux on June 11, 2022 in Burnaby BC. Wayne is predeceased by his parents Clay and Estelle Giroux, and leaves behind his beloved children Stacey, Jacob (Kayla), Chantelle and Liam all of Regina Saskatchewan.

Wayne also leaves many wonderful friends Ross, Ken, Earl and Barb among so many others and fellow musicians.

Wayne’s passion was music. He was an accomplished bass player and played in many local bands becoming a popular musician on the local scene in Regina. Many recording projects and performances kept him busy. Recording an album and playing in Toronto - being broadcast on national TV with his band Sound Junkys was a highlight.

His other loves were mechanics, always ready to provide advice or a hand, and electronics which led him into the complimentary field of Audio Visual technician/ designer. His excellence in that area, attracted him to bigger and better things in British Columbia.

Wayne’s family thanks all of those who reached out and loved our father , a memorial will be held at the later time.

In lieu of flowers, please make donations to your local mental health centres in memory of Wayne.

All rights reserved. This obituary is also archived at obittree.com